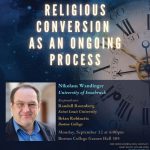 Nikolaus Wandinger will present “Religious Conversion as on Ongoing Process” at Boston College. This talk will include Schwager’s and Girard’s discussion on sacrifice and Wolfgang Palaver‘s distinction between the holy and the sacred. Brian Robinette will be one of the respondents. The presentation will be streamed on Zoom. Register here.

Full information and registration are available. There will be a special registration that includes only the virtual component of the meeting. 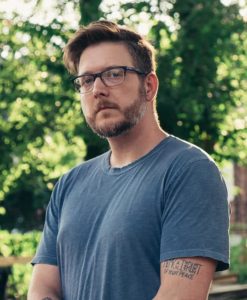 William Price, III tells stories through film and digital media. He has collaborated professionally with Grammy-winning bands non-profits, startups, and healthcare companies. In his personal work, this award-winning filmmaker reflects a darkly tinged spirituality that aches for transcendence and embraces the brutal tension between beauty and suffering; this spirit informs his efforts as a screenwriter, director, actor and creative director—forming pieces through him that often orbit questions of identity, relationship, terror, and hope for mercy. Claire McKenna, William’s most recent narrative film, commissioned by the 8beats Movie project, has been enjoyed and awarded at festivals around the world. William is a father of two, a fledgling woodworker, and an avid fan of sport and art of all kinds.

Professor Marcia Pally teaches at New York University and is an annual guest professor at the Theology Faculty of Humboldt University, Berlin. Her most recent books are Mimesis and Sacrifice(2019),Commonwealth and Covenant: Economics, Politics, and Theologies of Relationality (2016),  and America’s New Evangelicals: Expanding the vision of the common good (2011).

Commonwealth and Covenant was selected by the United Nations Committee on Education for Justice for worldwide distribution and was nominated for a Grawemeyer Award in religion. Prof. Pally has presented widely at Oxford; Institut d’études européennes et internationales du Luxembourg; and the John F. Kennedy School for North American Studies, Free University, Berlin, among many others. She has also spoken at the World Economic Forum, been awarded the prestigious Mercator Guest Professorship (German Research Foundation), was a 2019-2020 Fellow at the Center for Theological Inquiry (Princeton), and twice a Fellow at the Institute for Advanced Study-Berlin. In addition to her academic work, Prof. Pally has been a columnist and contributor to public-interest periodicals, including Religion and Ethics, Commonweal, The New York Times, Political Theology Network, The Guardian, and Religion News Service. 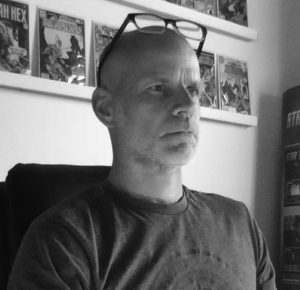 Kevin Miller is a best-selling novelist and award-winning filmmaker. He is the recipient of the 2013 Raven Award for Excellence in Arts and Entertainment and directed Hellbound? and J.E.S.U.S.A.

His independently published debut novel, Up the Creek, has topped Amazon.com’s Canadian literature best-seller list for over 12 weeks. Over the past 25 years, he has applied his craft to a wide range of projects, including feature films, documentaries, novels, non-fiction books, and comic books. He has also taught creative writing across Canada and the US as well as in the UK and Australia. Kevin has been featured on CBC Radio, CNN, and numerous other radio and TV outlets, and his work has his been written about and reviewed in dozens of publications, including the New York Times, Variety, the Globe and Mail, and the Vancouver Sun. When Kevin isn’t snorkeling with sharks in the Galapagos or interviewing war criminals in a fly-infested market in Sierra Leone, to name a few of the adventures his career has taken him on, he lives in British Columbia, Canada with his wife and four children. Patty Prasada-Rao was born to Indian parents in the U.S. with an extended family network, which instilled in her a strong value for community and what it means to belong together. She has worked with non-profits for over 25 years both in the US and overseas, including community development, organizational and professional leadership development, campus ministry, and national association work and has served on boards of local, national, and international community development organizations. Her management skills include strategic planning, fundraising, organizational infrastructure, board/staff development, and finance. A large focus of Patty’s work has been on issues that impact underserved communities both domestically and abroad and how marginalized community members can take the lead in transformation and renewal.

Patty received her Bachelor of Arts in Psychology/Pre-med from The Johns Hopkins University and a Masters of Public Health in Health Behavior/Health Educations from the University of North Carolina-Chapel Hill. Her ongoing education has come from grass-roots work living and learning with her neighbors in the Sandtown (Baltimore) and Lawndale (Chicago) neighborhoods, as well as her grandfather’s village of Mandapaka (Tanuku, Andhra Pradesh) in India.

Enjoy these recordings of the event. A transcript of the Mimetic Invitations Launch Party is available for download..